In Texas, That ‘Other’ Supreme Court Immigration Ruling Looms Large 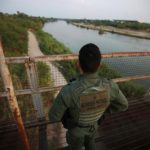 A U.S. border patrol agent looks over the Rio Grande at the border between the United States and Mexico, in Roma, Texas. The Supreme Court ruled on Monday that a U.S. border patrol officer accused of shooting a 15-year-old Mexican on Mexican soil has to stand trial.
CARLOS BARRIA/REUTERS

The recent Supreme Court decision upholding parts of President Trump’s travel ban earned most of the national media’s attention, but another ruling on border issues may also have huge impact. Newsweek magazine explains that “…. the ruling in the case of a teenager shot dead on Mexican soil by a U.S. border patrol officer in 2010 will have consequences for law enforcement along the border… the Supreme Court ruled that the 5th U.S. Circuit Court of Appeals must consider the case, rejecting the lower court’s previous ruling that upheld the immunity from prosecution of U.S. Border Patrol Agent Jesus Mesa Jr., who fatally shot a 15-year-old Mexican, Sergio Adrian Hernández Guereca, under his left eye.
The FBI had previously cleared the agent of any wrongdoing, and the government had defended his immunity from civil lawsuits. The family and immigration advocates are welcoming the ruling and note that it will help determine future border agent practices.

See the Newsweek story here:
Trump’s efforts to restrict immigration from Mexico are hitting a legal wall in Texas