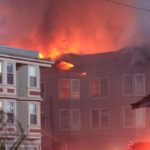 Oakland is facing a lawsuit stemming from a fatal fire that killed four people in a halfway house at 2551 San Pablo Avenue in March 2017, The Mercury News reported.

“Surviving tenants and families of victims who lived at 2551 San Pablo Ave. originally filed suit in April 2017 against building owner Keith Kim and a nonprofit agency that provided services there,” explained The Mercury News. “The city was added to the list of defendants in a master complaint filed last month in Alameda County Superior Court.”

Oakland is already facing a suit for a Dec. 2, 2016 fire in which 36 people perished at an electronic dance party at the “Ghost Ship” warehouse. The Ghost Ship lawsuit helped open the door for the San Pablo fire suit: “In November, an Alameda County Superior Court judge ruled Oakland had a ‘mandatory duty’ to ensure safety at the Ghost Ship warehouse. The tentative ruling pierced through broad immunities protecting California cities from civil lawsuits to protect workers who either botched inspections of a building or failed to perform the inspection at all,” the report stated.

Both the San Pablo and Ghost Ship fires exposed deep flaws in Oakland’s fire inspection system. According to the San Pablo lawsuit, “These people were plunged into darkness and thick, black smoke and tried to exit the unsafe structure. The interior of the three-story, 43-unit building was a known fire hazard which was cluttered with storage, debris, discarded furniture and open piles of garbage.”

← Closure of Office for Access to Justice
Criminal records cleared for some Californians convicted on pot charges →
Logging In...