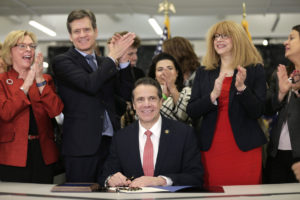 Gov. Andrew Cuomo signed the Child Victims Act on Feb. 14, 2019 which extended the statute of limitations on child sexual abuse filings for one year. Photo credit: AP Photo/Seth Wenig as reported by the Brooklyn Daily Eagle on 8/14/19.

Beginning today in New York, there will be no statute of limitations to prevent filing child sexual abuse lawsuits against alleged perpetrators, no matter how long ago it occurred, for up to a year.

According to the Brooklyn Daily Eagle, “This so-called ‘look-back window’ is part of the Child Victims Act, which extended the statute of limitations for both criminal and civil lawsuits when it was signed into New York State law by Gov. Andrew Cuomo in February. The bill had floundered in the State Senate for over a decade, blocked by Republican representatives. But after Democrats took majority control in January, it quickly arrived on the Assembly floor and passed by a resounding 130-3 vote.”

The report explains, “The Child Victims Act now allows prosecutors to bring criminal charges against an alleged sexual abuse offender until an accuser turns 28, and alleged victims can also now file a civil lawsuit any time before they reach 55 years of age. Previously, child sexual abuse offenses could only be prosecuted within five years of their occurrence, and civil lawsuits could only be filed prior to an alleged victim’s 21st birthday.”

Four other states – California, Hawaii, Minnesota, and Delaware — have extended the statute of limitations for child sexual abuse cases.