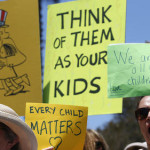 As reported by the LA Times: Karla Salazar, right, and Ellen Leonard on Tuesday joined nearly 100 demonstrators at the naval base in Port Hueneme, where hundreds of immigrant children are being housed. (Robert Gauthier / Los Angeles Times)

In a country where citizens are only vaguely aware that immigration is mostly controlled by civil, not criminal, courts, the ongoing “unaccompanied children” crisis is serving to shed some light on how the civil courts work – or, more exactly, how they sometimes don’t work. Now a coalition of immigration groups has filed a federal lawsuit against the United States over non-representation of these children, The Los Angeles Times is reporting.

The Times reports that “… the immigrant advocacy groups that filed suit are targeting ongoing actions in which immigration officials have initiated proceedings to deport thousands of minors, both recent arrivals as well as those who have lived for years in the United States but without permission. Many of the children never hire attorneys, appearing in court by themselves. Because immigration cases are civil, not criminal proceedings, defendants are not guaranteed the right to legal counsel.”
The immigration groups make the same basic argument that other juvenile advocates make, “… attorneys argue that children are not equipped to represent themselves in serious cases that can determine their future, lacking the intellectual and emotional capacity of adults as well as knowledge of legal remedies that may be available to them.”

Meanwhile, federal authorities say that some of the 243 immigration judges in 59 courts nationwide will be reassigned to hear the cases, either at the border or by video with some new judges appointed temporarily. Clearly, the issue is not going away – read some of the Times’ excellent coverage here.