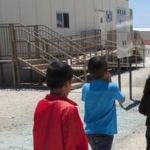 Lawyers for the detained families filed a motion with the U.S. District Court of Central District of California Tuesday night charging the administration with violating a federal judge’s ruling last summer that prohibits children from being detained – even with their mothers – in jail-like facilities for more time than it takes to process and release them to family members, reports Franco Ordonez at McClatchy news service.

The report notes that “… U.S. District Judge Dolly Gee in Los Angeles found that the Obama administration’s family detention policy violates an 18-year-old court settlement regarding the detention of migrant children. She gave the government until Oct. 23 to comply with her order that required officials release children within five days. She provided an exception that allows officials to hold families for about three weeks under exceptional circumstances like the 2014 border surge of nearly 70,000 families from Central America.”

As background, it is also noted that the “… court filing is only the latest in the family detention saga to cast a shadow on the Obama administration since resurrecting the controversial detention policy because of the surge… the United States is worried enough about violence in El Salvador, Guatemala and Honduras that its expanding the refugee program for vulnerable migrants. At the same time, the U.S. Department of Homeland Security continues to detain and deport families – many of whom have requested asylum because of the violence – to those same countries.”
Read the story here:
Obama administration pulled back to court over family detention