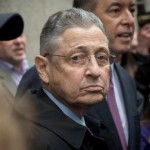 The federal judge who sentenced former New York Assembly Speaker Sheldon Silver to 12 years in prison has granted the 72-year-old two more months of freedom before he begin to serve time. The delay comes because the U.S. Supreme Court is taking up the case of a convicted Virginia governor and one of the issues is what constitutes an “official act.”

The judge also set up a five-week briefing schedule after the Supreme Court rules in former Virginia Gov. Bob McDonnell’s challenge to his corruption conviction. That time will allow her to decide if Silver is entitled to bail pending appeal because a reversal is likely.