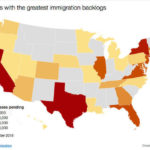 “What happens when a federal push to ramp up arrests and deportations hits a severely backlogged federal court system?” It’s a good question being asked by CBS News as it notes that “… President Donald Trump is taking what he portrays as a hard-nosed approach to undocumented immigrants, issuing an order this week to boost the number of U.S. border patrol agents and to build detention centers.”

Omar Jadwat, an attorney and director of the Immigrant Rights Project at the ACLU, offers an answer: “It’s a recipe for a due process disaster.” CBS backgrounds: “Just how backlogged is the system for adjudicating deportations and related legal matters? America’s immigration courts are now handling a record-breaking level of cases, with more than 533,000 cases currently pending, according to Syracuse University’s TRAC, a data gathering site that tracks the federal government’s enforcement activities. That figure is more than double the number when Mr. Obama took office in 2009.”
Read the excellent reporting here: