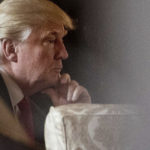 The story notes that “… Trump rarely backs down from a fight, but there were initial signs that the White House might not proceed as originally expected with an emergency application to the Supreme Court. Legal experts said it was doubtful Trump could muster what he’d need to get immediate relief there: the votes of five justices on the high court, which remains shorthanded with only eight justices. A 4-4 deadlock would leave the ruling suspending enforcement of Trump’s ban in place.”

← CBS News Asking How Trump Policy Works With Court Backlog
Amid ICE Raids, Courts Are Even More Backed Up →
Logging In...