President-Elect May Continue Lawsuits During Term 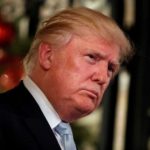 In this Dec. 28, 2016 file photo, President-elect Donald Trump listens to a question as he speaks to reporters at Mar-a-Lago, in Palm Beach, Fla. Trump gave a videotaped deposition on Thursday, Jan. 5, 2017, for a lawsuit stemming from a clash with a celebrity restaurateur at his new Washington hotel. It was a rare legal proceeding for a president-elect or sitting president that highlights the legal woes that could follow Trump to the Oval Office. Photo Credit, San Francisco Chronicle file photo

President-elect Donald Trump may be the first president to conduct multiple lawsuits while in office. The San Francisco Chronicle is reporting that Trump “… sat for an hour at Trump Tower to give testimony in a lawsuit he filed against Jose Andres after the chef cancelled plans to open a Spanish-themed restaurant at a new Washington hotel. Andres pulled out after Trump, in declaring his candidacy for president, called some Mexican immigrants “rapists” and said some were bringing drugs and crime to the U.S.”

The newspaper backgrounded that “… under the doctrine of immunity, presidents cannot be sued for actions they take in carrying out presidential duties. But anything outside that is open season. In its 1997 decision in the Paula Jones sexual harassment case against Bill Clinton, the Supreme Court ruled that presidents can be sued while in office for actions unrelated to official acts.”

Given his vast business empire and several ongoing civil actions, its expected that the new president may be doing depositions fairly routinely.

← What Trump Could Mean To Asbestos Lawsuit Scandals
Police Skepticism Hitting L.A. In The Legal Fee Pocketbook →
Logging In...