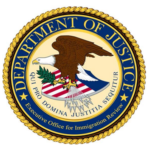 Official seal of the Executive Office of Immigration Review, which operates the U.S. immigration courts.

The federal immigration courts, already over-booked with a half-million pending cases and the focus of President Trump’s crackdown strategies, are getting a bit testy out San Francisco way. A reporter with the East Bay Express, a small but scrappy newspaper, wrote about being asked to leave a proceeding.

The story paints an alarming picture of federal agents lacking transparency. While not a direct part of the story, it also illustrates that the “judges” actually work for the Justice Department and are not regular federal judges.

← Amid ICE Raids, Courts Are Even More Backed Up
Florida Newspaper Endorsed ‘Civil Gideon’ →
Logging In...