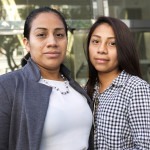 A new Southern California Public Radio report documents an “uptick” in those families seeking refuge in the United States from Central American nations, and the ongoing Immigration Courts crisis that goes along with it. The SCPR report begins with an example: “Michell Hernández’s case entered the immigration court in August as the system faced an unprecedented backlog, surpassing half a million ongoing cases nationwide. According to government data from Syracuse University’s TRAC, immigration courts fielded 516,031 cases, as of September 2016. Those numbers include both adult and juvenile cases.

One in five of those cases are in California – the biggest share of any state. And half of those, or nearly 50,000, are in Los Angeles.”
The report has other stats: “There are 250 judges in 58 courts across the nation, according to the Executive Office of Immigration Review, the agency that oversees the courts. Thirty judges currently serve in L.A. In response to the rising caseload, the agency has added more judges and staff, including swearing in an additional judge in Los Angeles this month. That followed  three new judges joining the L.A. courts in June. Still, judges typically handle dozens of cases a day.”
The uptick comes as the report backgrounds: “In 2015, the number of child migrants dropped across the Southwest border, but recent figures from the U.S. Customs and Border Protection show that those numbers have ticked back up. Through October 2016, for example, nearly 60,000 children have crossed the border alone in the past 12 months and over 77,000 families have been apprehended.”
Read the excellent reporting here:
After asylum: ‘Our children have lost their freedom’