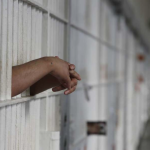 An inmate’s hands are seen folded together outside a cell at the jail at the Hall of Justice on Tuesday, December 1, 2015 in San Francisco, Calif. Photo: Lea Suzuki, The Chronicle

Citing lessons learned from Ferguson, Mo., the treasurer of San Francisco is warning that the city may be practicing “predatory government,” a reference to “predatory lending” that targets lower income families. Jose Cisneros notes that a Justice Department investigation revealed “… a pattern of of ticketing people for minor offenses – like having a busted taillight or high grass in their yard. If people couldn’t pay the ticket, which averaged a few hundred dollars, then their fines grew.”

But the treasurer quickly shifted to his city, noting that the famously liberal city levies more fines per capita than most California counties, and assesses more fines per capita than Philly, Louisville, Ky. and Nashville – all cities of similar size. Cisneros is launching several efforts to confront the problem and one idea is for non-monetary alternatives to fines and even bail. He says two thirds of people in California jails have not been convicted of a crime but are there because they cannot afford bail.
The commentary, published in the Chronicle print edition and online, is one of the best-argued pieces in recent memory on the subject of the Ferguson issues, especially because it comes from an elected official who is, after all, the local government’s “debt collector.” It should be printed and tacked to every bulletin board of every City Hall in America. And faxing a copy over to Trump Tower couldn’t hurt.
http://www.sfchronicle.com/opinion/openforum/article/San-Francisco-has-become-a-predatory-government-10641316.php