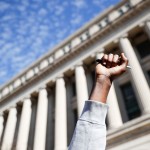 AP/John Minchillo
A protestor holds his fist in the air during a demonstration outside Hamilton County Courthouse in Cincinnati, November 11, 2016.

If you’re looking for a great argument in favor of a “civil Gideon” right to counsel in some non-criminal cases, you can’t do much better than an article by Rebecca Backwater-Poza posted at the Center for American Progress. Civil Gideon refers to the criminal-law right to an attorney even if you can’t afford one. The “civil” idea is that some life-altering cases, especially involving housing evictions and family law, should include representation for the poor.

She notes that: “While 90 to 95 percent of landlords are represented by lawyers before the Landlord and Tenant Branch of the D.C. Superior Court, only 5 to 10 percent of tenants have legal assistance. 2 Unlike criminal defendants, parties in civil cases do not have a generalized right to counsel. While all states provide a right to counsel for at least a few types of civil cases, most parties in civil cases that involve high stakes and basic human needs, such as housing, do not have a right to representation.3

In more than three-fourths of all civil trial cases in the United States, at least one litigant does not have a lawyer. 4 Figures are even starker when it comes to family law, domestic violence, housing, and small-claims matters—those involving disputes over amounts up to $25,000, depending on the state. At least one party lacks representation in 70 to 98 percent of these cases.”
She also notes that those are only the cases that make to to court; many do not, often because people do not know their rights. It’s compelling reporting.