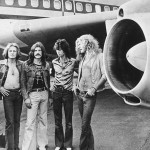 You know they will have to play Stairway to Heaven in court, very likely over and over again. But, in a case that experts say might further evolve copyright law, Led Zeppelin is defending creation of the iconic song. The New York Times, in a page one story no less, says that “… the case focuses on the famous opening of “Stairway to Heaven,” in which an acoustic guitar plays arpeggiated chords in a descending pattern. That part, the suit contends, copied Spirit’s “Taurus,” released in 1968. In the suit’s complaint, Francis Malofiy, the lead lawyer representing the plaintiff, said that Led Zeppelin’s members heard Spirit’s song when the bands crossed paths on the road early in their careers.”

The guy with Spirit who, it is claimed, actually created the signature riff didn’t bring a lawsuit in his lifetime. But in recent years, courts have ruled that such challenges can happen long after a copyright is established by creation, and the musicians’ estate brought the lawsuit, which has been famously making its way through the California justice system for years. Now, it’s expected to be a headliner all summer.

Read the Times’ take here: Led Zeppelin’s ‘Stairway to Heaven’ to Be Scrutinized in Court in Copyright Case

← One Nation? It’s All Regional When It Comes To Staying In U.S.A.
Judge Delays San Francisco Sugar Warnings →
Logging In...