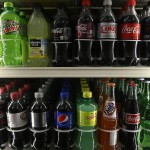 The San Francisco board of supervisors has approved an ordinance that would require warning labels to be placed on advertisements for soda and sugary drinks to alert consumers of the risk of obesity, diabetes and tooth decay. PHOTO: GETTY IMAGES

The city of San Francisco’s efforts to require health warning for soda and other sugar-added beverages, closely watching because of implications for similar warnings in other places, has been placed on hold by a federal judge. The delay, in effect, grants the beverage industry some more time pending the appeals process. The measure was set to go into effect July 25.

The Wall Street Journals explains that San Francisco seeks to “… require that billboards and other public advertisements include the language: ‘WARNING: Drinking beverages with added sugar(s) contributes to obesity, diabetes, and tooth decay. This is a message from the City and County of San Francisco.'”

The WSJ also notes that “… the American Beverage Association filed a civil complaint in the U.S. District Court for the Northern District of California last July, arguing that the requirement violates free-speech rights under the First Amendment. The California Retailers Association and California State Outdoor Advertising Association joined the complaint.”