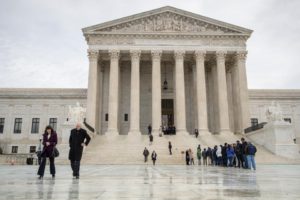 Billions of dollars in government revenue and one of the most contentious constitutional questions of the present day are at stake in a pending U.S. Supreme Court case over civil forfeiture.

“For the first time in over 20 years, the U.S. Supreme Court will have the opportunity to review the constitutionality of civil forfeiture laws, which allow the government to confiscate cash, cars, and even homes,” Forbes reported.

Civil forfeiture laws allowed local and state jurisdictions to reap millions of dollars: “from 2001 to 2014, the Justice Department and the Treasury Department’s forfeiture funds took in almost $29 billion,” Forbes reported.

The court has granted a cert petition from Tyson Timbs, “who was forced to forfeit his $40,000 Land Rover in civil court to the State of Indiana, after he pled guilty to selling less than $200 worth of drugs,” the Forbes article reported.

Timbs prevailed in lower courts, but last fall the Indiana Supreme Court ruled against him. “The Excessive Fines Clause does not bar the State from forfeiting Defendant’s vehicle,” the court ruled, “because the United States Supreme Court has not held that the Clause applies to the States through the Fourteenth Amendment.”

Now, the U.S. Supreme Court is poised to weigh in.