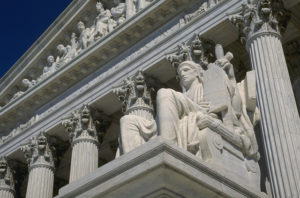 In a major immigration case, the U.S. Supreme Court issued its decision in Jennings v. Rodriguez, a class action lawsuit challenging the federal government’s practice of jailing immigrants while they litigate their deportation cases. It ruled that detainees held by the government for possible deportation are not entitled to a bond hearing even after months or years of detention. Civil rights advocates, such as the ACLU, question whether it is constitutional to “lock up immigrants indefinitely.”

The Washington Post reported on the Feb. 27 ruling, noting, “In a splintered 5 to 3 decision, the court’s conservatives said that the relevant statute does not even ‘hint,’ as Justice Samuel A. Alito Jr. wrote, at the broad reading of the right to bail hearings adopted by the U.S. Court of Appeals for the 9th Circuit.”

The American Civil Liberties Union argued, “In the appeals court, we fought for and won on the principle that immigrants should be given the opportunity to present their case to a judge, allowing that judge to decide whether the detainee could be released without risk of flight or threat to public safety.”

← Criminal records cleared for some Californians convicted on pot charges
Remington mum about effects of bankruptcy on settlement →
Logging In...