The Key To Immigration? Hiring An Attorney 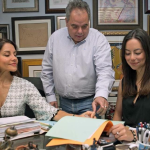 A Miami Herald report is adding fuel to the argument that would-be immigrants with legal representation fare much better than those without. The newspaper focuses on an individual case that “… seems to prove the theory among immigration lawyers that foreign nationals represented by an attorney in immigration court proceedings have a better chance of winning their case than those left to their own devices. But the first formal study on legal representation of foreign nationals in immigration proceedings actually proves the validity of that theory.”

“By reviewing over 1.2 million deportation cases decided across the United States over a six-year period, this report provides an urgent portrait of the lack of counsel in immigration courts,” according to the study issued by the American Immigration Council. “In it, we reveal that 63 percent of all immigrants went to court without an attorney. Detained immigrants were even less likely to obtain counsel — 86 percent attended their court hearings without an attorney. For immigrants held in remote detention centers, access to counsel was even more severely impaired, only 10 percent of immigrants detained in small cities obtained counsel.”

You can read the Herald story here: For immigrants crossing the border, they need one thing to help win the case