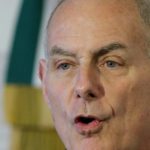 The Los Angeles Times has a good deep-dive report into the Trump administration’s “expedited deportation” policy, noting that legal challenges are being planned. The report notes that “… [the] administration’s efforts to step up immigration enforcement and streamline deportation — outlined in memos from Homeland Security Secretary John F. Kelly — could affect far more people, including potentially most of the estimated 11 million immigrants living illegally in the United States.”

And it adds that “… one part of that effort — the expanded use of what the law refers to as expedited removal — is almost certain to face a constitutional challenge in the courts.”

The Times backgrounds that the U.S. Supreme Court has repeatedly said that immigrants, even those who are here illegally, are protected by the Constitution’s guarantee of due process of law. The justices cite the 5th Amendment, which says, “No person shall be … deprived of life, liberty or property, without due process of law.” Because the language refers to “no person,” not to “no citizen,” its protections cover “even one whose presence in this country is unlawful, involuntary or transitory,” the court said unanimously in 1976.

But how much process is due for immigrants who entered illegally or overstayed their visas remains “a gray area,” said UCLA law professor Hiroshi Motomura.

Trump’s fast-track deportations face a legal hurdle: Do unauthorized immigrants have a right to a hearing before a judge?