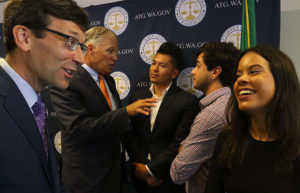 While 15 states and the District of Columbia are signed on to challenge President Trump’s planned removal of DACA, it turns out that only three – Washington, New York and Massachusetts – will take the lead on the lawsuit, That will include the state attorney general who is perhaps the most vocal in his opposition, Washington Attorney General Bob Ferguson, who has long been an outspoken defender of DACA – the “Deferred Action for Childhood Arrivals” program.

“It’s outrageous.” said Ferguson in a press conference. “It is. It’s outrageous. I’m not going to put up with it.” He also said this is “… a “dark time for our country.” The challenge will focus on claims of racial and ethnic bias against the “dreamers,” most of whom are from Mexico. The Seattle Times has coverage of Ferguson and the state’s leadership role here:

‘I’m not going to put up with it’: Washington AG Ferguson says lawsuit over DACA will show Trump’s bias