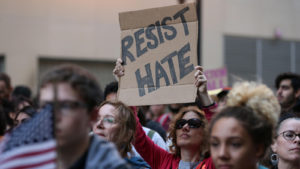 Fifteen states –  including California, the nation’s largest state – and the District of Columbia sued the U.S. government Wednesday to block President Donald Trump’s plan to end protection against deportation for young immigrants. The lawsuit filed in federal court in Brooklyn asked a judge to strike down as unconstitutional the president’s action involving the Deferred Action for Childhood Arrivals program, or DACA.

The Chicago Tribune was among those reporting on the lawsuit, noting that “… the awsuit filed Wednesday says rescinding DACA will injure state-run colleges and universities, upset workplaces and damage companies and economies that include immigrants covered under the program. The lawsuit noted that Harvard University has over 50 DACA students while Tufts University has more than 25. Both schools are in Massachusetts.

← With Trump’s DACA Decision, A Look At Context
Three State Will Lead On DACA Lawsuit →
Logging In...