With Trump’s DACA Decision, A Look At Context 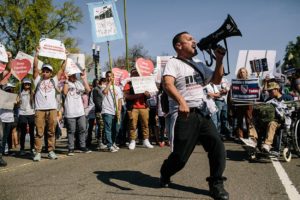 Tomas Martinez, with GLAHR, a grass roots organization from Atlanta, chants to excite the crowd in front of the U.S. Supreme Court in Washington, D.C., on Monday, April 18, 2016. Hundreds gathered in front of the U.S. Supreme Court to show their support for President Obama’s immigration executive action as the Court hears oral arguments on the deferred action initiatives, DAPA and expanded DACA. Photo Credit: Lexey Swall

The Texas Tribune continues excellent coverage of President Trump’s milestone decision on DACA, the Obama-era program that allows undocumented immigrants to stay in the county with some status if they came into the country before they were 16 years old and were 30 or younger in June of 2012. The “dreamer” act is a big deal everywhere, but none more bigly a deal than in Texas.

The Tribune reminded its readers that Texas has a leadership role in opposing the plan, both with civil lawsuits and threats of legal action. They also note the relevance for the Lone Star State: “… as of August 2016, more than 220,000 undocumented immigrants in Texas had applied for a permit or a renewal of one under the program, and nearly 200,000 of those have been approved, according to government statistics. It’s the second-highest total behind California’s estimated 387,000 applications and 359,000 approvals during the same time frame.”

Texas, we are reminded, led 10 states in legal challenges to the Obama policy.

“The DACA initiative preceded a broader but ill-fated 2014 program, known as DAPA, which would have expanded the eligible population of the program and lengthened the work permits to three years. That program was never implemented after the state of Texas sued the Obama administration and successfully convinced a district judge and an appellate court that Obama overstepped his executive authority. Last year, the U.S. Supreme Court split on the matter and upheld the appellate court’s decision.

“The Trump administration officially rescinded that policy earlier this month but said that DACA and some expanded DACA permits would remain in effect. Paxton argued in Thursday’s letter that that’s not good enough and warned that if the 2012 program isn’t rescinded, he and the other plaintiffs from the 2014 lawsuit would go back to court to settle the issue.

“If, by September 5, 2017, the Executive Branch agrees to rescind the June 15, 2012 DACA memorandum and not to renew or issue any new DACA or Expanded DACA permits in the future, then the plaintiffs that successfully challenged DAPA and Expanded DACA will voluntarily dismiss their lawsuit currently pending in the Southern District of Texas,” they write. ‘Otherwise, the complaint in that case will be amended to challenge both the DACA program and the remaining Expanded DACA permits.'”

Follow the debate from what amounts to Ground Zero in Texas here: