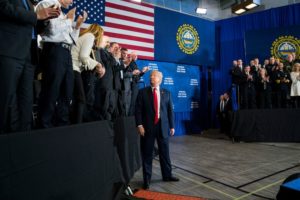 President Trump and the U.S. Justice Department have championed lawsuits against opioid manufacturers as part of a broader push to stem the deadly rise in opioid addiction.

CNBC reported that the U.S. Justice Department launched a new task force to “target the makers and distributors of prescription painkillers who, according to Attorney General Jeff Sessions, have contributed to an epidemic of fatal overdoses from opioids by selling too much of the addictive drugs.”

Sessions said he is ordering the task force “to examine existing state and local government lawsuits against opioid manufacturers to determine if we can be of assistance,” CNBC reported.

President Trump made his first visit to New Hampshire since the 2016 election on Monday, March 19, when he rolled out a plan to curb opioid addiction.

The New York Times noted that the plan included “the death penalty for drug dealers and a crackdown on illegal immigrants.”

New Hampshire experienced the nation’s third-highest rate of deaths from overdoses, The New York Times reported. “Drug overdoses killed roughly 64,000 people in the United States in 2016, according to initial estimates from the C.D.C., and have become the leading cause of death for Americans under 50,” the newspaper reported.

In response to the President’s speech, Sessions said he assigned “a dozen experienced prosecutors in opioid hot-spot districts to focus solely on investigating and prosecuting opioid-related health care fraud.”

Sessions, in a speech on Thursday, March 22, noted that the President has voiced his “strong support for the Department of Justice’s new Prescription Interdiction and Litigation — or PIL — Task Force,” which will “focus on and coordinate the Department’s efforts to investigate, prosecute or bring lawsuits against opioid manufacturers and distributors who have unlawfully contributed to this epidemic” and will review existing laws. It will also consider assisting with ongoing state and local government lawsuits against opioid manufacturers.