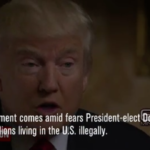 One impact of the pending Trump administration is already being felt as some states and cities are preparing funds to fight deportation. While it’s only one part of the issue, the funding is a boost to the movement for a “civil Gideon” policy that would provide a right to an attorney in some civil cases – like the right to an attorney for criminal cases. The Gideon case was the policy-setting decision for that criminal-case right.

Immigration advocates have long argued that some deportation cases should be among those requiring representation, especially when children are involved. Funding has always been part of the discussion, but some governments are finding cash in the wake of President-Elect Trump’s victory. For example, the Los Angeles Times reports that  LA city and county leaders have “… unveiled a $10-million fund to provide legal assistance for residents facing deportation, the region’s boldest move yet as it prepares for an expected crackdown on illegal immigration by Donald Trump. If approved by lawmakers, Los Angeles’ two top government agencies could find themselves in the position of using public funds to challenge policies sought by the White House and Republican Congress.”

Similar efforts are under way in New York, San Francisco, Chicago and the state of New York.

← UnSettled: Inside the Strange World of Asbestos Lawsuits
A Good Place To Discover ‘Civil Gideon’ →
Logging In...