US Supreme Court Nixes Appeal In Levee Case Against 97 Firms 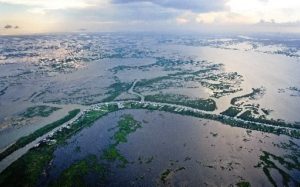 Damage to wetlands caused by canals, such as seen here around the Delacroix community, was the focus of the failed lawsuit by the Southeast Louisiana Flood Protection Authority-East.(Ted Jackson, NOLA.com | The Times-Picayune archives)

The U.S. Supreme Court has refused to hear an appeal from a Louisiana flood protection district that had sued 97 oil and gas companies over environmental damages. The NOLA.com website explains that  “… the Southeast Louisiana Flood Protection Authority-East had appealed a March decision by the U.S. 5th Circuit Court of Appeals that upheld a 2015 decision by U.S. District Judge Nannette Jolivette Brown that the lawsuit involved enforcement of federal laws and thus should be heard in her courtroom, rather than returned to a state court as the levee authority wanted.”

The case also drew attention because of how it was structured. The legal team had a provision that allowed it to continue the litigation via appeals, and if the Authority decided to terminate the effort it would face millions in legal fees. If the litigation was ultimately unsuccessful, it would owe no fees. That came into play as political winds shifted and the new appointed Authority leaders actually opposed the lawsuit – but would not end the case in the face-off those fees.