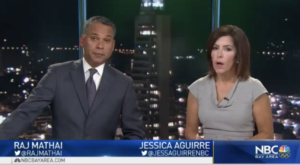 Those waiting to have their asylum cases heard find the reality that there currently aren’t enough judges and staff to handle the demand leaving some applicants forced to wait for years while their witnesses and key evidence disappear. NBC Bay Area Senior Investigative Reporter Stephen Stock reports in a video that first aired on Sept. 25, 2017. (Published Monday, Sept. 25, 2017

Investigative journalism by NBC-owned stations, working with Telemundo stations around the country, has found that San Francisco leads the nation in backlogged immigration court cases, which is no easy task considering how badly things are going.

A joint investigation by NBC owned and operated stations in conjunction with Telemundo stations around the country found a record backlog of immigration cases clogging an overloaded and over stressed system. The NBC Bay Area report says that “… court records show waits that last more than 1,000 days in some cases. And, those records show, some immigration cases in US Immigration Court in San Francisco now are being scheduled as far into the future as July 2022. The reason: there simply aren’t enough judges and staff to handle such an overwhelmed Immigration Court system.”
They quote Judge Dana Leigh Marks, one of the very few immigration judges daring to speak about the crisis. Why? Because these are not really “federal” judges, but actually work for the Justice Department. Note how carefully they identify her role:
“It is painful for the judges and it is painful for the community we serve,” says Judge Dana Leigh Marks, who spoke to us in her role as President of the National Association of Immigration Judges. “A lot of people tell us that they fear for their very life if they’re sent back to their home country. That’s a death penalty case.”
Going beyond the numbers, the journalists document real-world impacts. It’s not an easy read, but find the milestone report here:
San Francisco Leads Nation in US Immigration Court Calendar Delays – NBC Bay Area http://www.nbcbayarea.com/investigations/As-immigration-delays-skyrocket-San-Francisco-leads-the-nation-447705953.html#ixzz4v1On6rTK