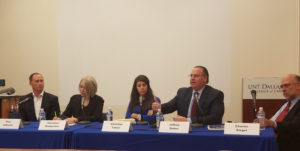 In a panel discussing following a work-in-progress screening of his new asbestos documentary, filmmaker Paul Johnson might put at least two of America’s leading trail attorneys in the “needs more progress” category. The SE Texas Record reports that  “… a couple of Texas’ most well-known toxic tort litigators had a few choice words after watching the unveiling of “Unsettled,” a documentary that offers a glimpse “Inside the Strange World of Asbestos Lawsuits.”

The Record also noted that the screening, which took place Sept. 20 at The University of North Texas/Dallas School of Law, drew a strong following: “… law Professionals from all walks of life were in attendance, including professors, students and a handful of prominent trial lawyers, who were all privy to a heated discussion between expert panelists following the viewing.”

Responding to the “heat,” Johnson pushed back, according to the Record: “… as the panelist discussion winded down, Johnson said he wanted his film to raise the following question: ‘At the end of the day, are lawyers taking too much money away from sick people?’ Without receiving much of a response, he asked Simon and Siegel if there was more asbestos attorneys could do to police the “bad actors” and if there was a better way to handle asbestos litigation so more money would go to those truly injured by asbestos products.”

(note: producers of the movie say the discussion will be posted to the film’s trailer site, later this week.