Election May Be Peak Of Obama’s Court-Appointment Power

The Los Angeles Times is noting that a Republican takeover of the United States Senate would likely mean that President Obama’s ability to control federal judicial appointments has peaked. The Times also notes that “… legal experts say it’s a record of unprecedented achievements in judicial diversity. Women make up 42% of his confirmed nominees, more than double the average of his five predecessors combined, while African Americans make up 18% and Latinos 6%. Eleven openly gay judges now serve…” 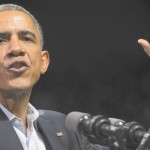 Photo from the LA Times report, “Obama’s best chance to influence the judiciary may be passing,” 11/2/14

There are still vacant seats, but you may recall the dust-up last November when Senate Democrats nixed the longtime filibuster rule for most judicial nominations, which allowed the president to select more liberal judges who would have had no chance under the old rules.
Less well known, after the filibuster change, is that Senate Judiciary Committee Chairman Patrick J. Leahy has continued what the Times calls a “… strict interpretation of arcane committee traditions, which effectively granted veto power over nominations to home-state senators.” That means the “… logjam was broken only in the 19 states with two Democratic senators. Often Obama has declined to nominate judges in states with Republican senators, leaving seven crucial appeals court seats, including the one on the 7th Circuit in Chicago, without a nominee.”
If you wonder what the election means for the nation’s courts, start with this LA Times report.