‘Stairway to Heaven’ gets second chance 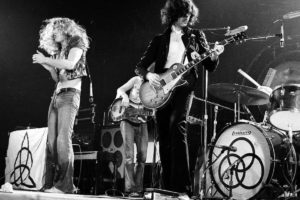 Photo credit: Michael Ochs Archives 1973, as reported by the San Francisco Chronicle on 6/10/19.

The U.S. federal court of appeals for the Ninth Circuit in San Francisco agreed Monday to give Led Zeppelin a new hearing to defend a jury’s favorable verdict in a suit that claimed the opening lines of the 1972 hit, “Stairway to Heaven,” had been plagiarized from a 1968 song by the California band Spirit, reports the San Francisco Chronicle.

“The 1968 Spirit instrumental ‘Taurus’ opens with a rising and falling guitar melody somewhat similar to the ‘Stairway to Heaven’ opening,” notes the report.

A Los Angles jury heard “conflicting testimony from musicology experts about whether the passages were similar enough for a copyright violation” during the trial in 2016.

“Led Zeppelin’s request for a rehearing, supported by other songwriters and music publishers, argued that allowing copyright protection for ‘commonplace elements’ in composition would cause ‘widespread confusion’ in the music business,” explains the report.