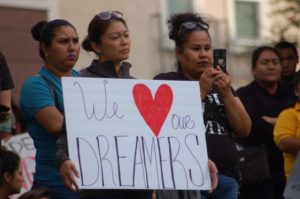 The subject of continued court battles, the Deferred Action for Childhood Arrivals program could see its fate decided by the U.S. Supreme Court.

“An Obama-era program granting hundreds of thousands of so-called Dreamers protection from deportation will live on, a federal appeals court ruled Thursday, dealing the Trump administration a significant blow and setting the stage for a showdown in the Supreme Court next year,” The Mercury News reported on Nov. 8.

“The 9th Circuit Court of Appeals upheld a nationwide injunction blocking the White House from rescinding the Deferred Action for Childhood Arrivals program, which has protected about 700,000 undocumented immigrants brought to the United States illegally as children, including 200,000 in California,” The Mercury News reported.

The Atlantic speculated about how the legal battle could play out at the nation’s highest court.

“The Court could do a number of things. It could grant a stay, which would temporarily stop further legal proceedings or the enforcement of orders. If a stay isn’t granted, confusion could reign, with DACA continued in some states and not in others. In any case, at least five justices would have to agree on next steps, and with a split Court a consensus would be difficult to achieve,” The Atlantic noted.

← Georgia-Pacific affiliate files for bankruptcy amid asbestos claims
Due to customer agreements, scooter companies could steer around lawsuits →
Logging In...