D.C. Among Those Talking ‘Civil Gideon’ for Evictions 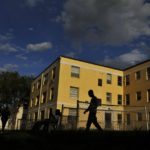 At some D.C. apartments, where tenants are overwhelmingly poor and recipients of housing vouchers, any violation of the lease — even walking your dog without a collar — becomes grounds for a suit for eviction. But far more common is suing over nonpayment of rent. Shown is Brookland Manor, a low-income housing complex that is undergoing redevelopment. (Michael S. Williamson/The Washington Post)

A trio of Washington, D.C., council members are making the case for a limited “civil Gideon” provision for District residents facing evictions. In a Washington Post op/ed, the three Democrats admit that their city might one considered already “tenant friendly” but that the legal policy is needed.
“Many tenants are pressured by lawyers representing their landlords to settle their case in the hallways outside of the courtrooms,” they write. “If you don’t understand the legalese, it’s hard to know what’s happening to you and it’s almost impossible to know what your options are. All the while, you just want to avoid becoming homeless.
The offer these stats: Of the 33,000 eviction cases filed annually in the District, fewer than 10 percent of tenants have legal representation during an eviction hearing; more than 90 percent of landlords are represented.
For background, they note a national movement: “… this is a small part of a larger national trend called ‘civil Gideon,’ a nod to the case that established the right to counsel for criminal defendants and is now a growing movement to create a right to counsel in civil cases.
See the piece here: Opinion | Low-income tenants in D.C. may soon get legal help