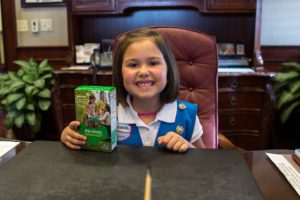 The Scouts are on the outs.

National Public Radio reports that the Girl Scouts of the USA filed a federal lawsuit “accusing the Boy Scouts of trademark infringement.”

The dispute started last October, “when the Boy Scouts said it would start allowing girls to join its programs,” NPR reports.

The Boy Scouts of America explained its policy in a summary sheet.

“Cub Scouting is organized in packs and dens. In 2018, an existing pack may choose to establish a new girl pack, establish a pack that consists of girl dens and boy dens or remain an all-boy pack. Cub Scout dens will be single-gender — all boys or all girls. Cub Scout packs, meanwhile, can include any combination of all-boy or all-girl dens,” the Boy Scouts explained.

“We are confused as to why, rather than working to appeal to the 90 percent of boys who are not involved in BSA programs, you would choose to target girls,” Hannan wrote.

← Due to customer agreements, scooter companies could steer around lawsuits
California official sues maker of Humira, alleging kickbacks →
Logging In...