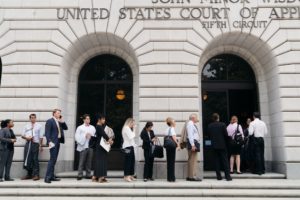 Photo Credit:Annie Flanagan for The New York Times as published in their report on 7/9/19.

The fate of the Affordable Care Act — commonly known as ObamaCare — rests with a federal appeals court, in a judicial standoff that could affect the 2020 presidential election.

The New York Times reports, “A panel of federal appeals court judges on Tuesday sounded likely to uphold a lower-court ruling that a central provision of the Affordable Care Act — the requirement that most people have health insurance — is unconstitutional. But it was harder to discern how the court might come down on a much bigger question: whether the rest of the sprawling health law must fall if the insurance mandate does.”

Yet as the 5th Circuit Court of Appeals in New Orleans ponders a ruling, the lawsuit could affect next year’s presidential election, The Hill.com reports.

“The lawsuit has proved to be a headache for congressional Republicans seeking to turn the page on their efforts to repeal ObamaCare after the issue helped Democrats win back the House in last year’s midterm elections,” The Hill.com reports.

“If the case makes it to the Supreme Court, the decision would likely be handed down in June 2020, dropping a bomb in the center of the presidential election.”

The health care law has weathered legal challenges since the U.S. Supreme Court upheld the mandate in 2012.

“If the mandate is indeed unconstitutional, the next question is whether the rest of the Affordable Care Act can function without it. In December,” The New York Times reports. “Judge Reed O’Connor of the Federal District Court in Fort Worth said it could not and declared that the entire law must fall.”