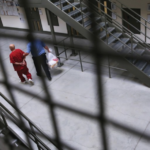 A guard escorts an immigrant detainee through the Adelanto Detention Facility in Adelanto, California, where around 2,000 detainees of Immigration and Customs Enforcement await hearings on their immigration status.
John Moore/Getty Images

The Colorado-based High Country News has published a deep-dive into how some asylum seekers looking for refuge in the United States are ending up being held in jail for longer times than might be necessary, and hinting that there might be financial incentives to do so. Shadowing once such seeker, the HCN says that “…he, like many of the other asylum-seekers held in the detention center, had passed a ‘credible fear’ interview and had no criminal record. Back in Ghana, [he]  had always imagined America as a country of freedom; a country where basic human rights were protected. Why keep us locked up? he thought. If you don’t want us, tell us to go back.”

The HCN backgrounds that “… under government policies, asylum seekers who pass their “credible fear” interview should be released from detention if their “identity is sufficiently established, the person poses neither a flight risk nor a danger to the community, and no additional factors weigh against release.”

But the HCN report details an array of incentives, including financial motives both public and private, for keeping people in jail longer. For example, the paper says, “… in 2012, 80 percent of asylum seekers who passed their credible fear interview were granted parole. By 2015, the number had dropped to 47 percent. The sharp drop coincided with an influx of migrants from Guatemala, El Salvador and Honduras, many of them asylum-seekers. On June 20, 2014, Secretary of Homeland Security Jeh Johnson announced a plan to significantly expand detention capacity to detain and quickly deport Central Americans, in an attempt to ‘send a message’ to those seeking asylum or attempting to cross the border illegally.

← The Southern Poverty Law Center and the Emory University School of Law are calling for an investigation
Chicago Trib Deep-Dives Into Immigration Court Delays →
Logging In...