On The ABA Not Standing Up To A ‘Libel Bully’ 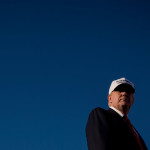 Donald J. Trump at a campaign rally in Naples, Fla., on Sunday. Credit Eric Thayer for The New York Times

Welcome to the age of the “libel bully.” The American Bar Association used the phrase to describe Republican presidential nominee Donald Trump in a report on his litigation, but knew better than to publish that report. The New York Times writes that “… the [ABA] report concluded that Mr. Trump was a “libel bully” who had filed many meritless suits attacking his opponents and had never won in court. But the bar association refused to publish the report, citing “the risk of the A.B.A. being sued by Mr. Trump.

The story notes that “..  internal communications, the bar association’s leadership, including its general counsel’s office and public relations staff, did not appear to dispute the report’s conclusions.

But James Dimos, the association’s deputy executive director, objected to the term ‘libel bully’ and other sharp language in the report, saying in an Oct. 19 email that the changes were needed to address ‘the legitimately held views of A.B.A. staff who are charged with managing the reputational and financial risk to the association.'”

Another quote from A.B.A. staff push-back: “While we do not believe that such a lawsuit has merit, it is certainly reasonable to attempt to reduce such a likelihood by removing inflammatory language that is unnecessary to further the article’s thesis,” Mr. Dimos wrote. “Honestly, it is the same advice members of the forum would provide to their own clients.”

Catch up on your irony here.