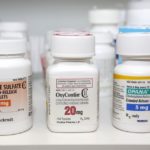 Image from a report in The Atlantic, 6/2/17, “Are Pharmaceutical Companies to Blame for the Opioid Epidemic?“

“Philadelphia-area union workers are joining a wave of litigation against opioid manufacturers after losing eight members to addiction in 11 months,” Policy and Medicine reported in an Oct. 18, 2017 update.

“In addition to the Philadelphia Federation of Teachers Health and Welfare Fund, the International Brotherhood of Electrical Workers Local Union 98 (IBEW) said it is preparing to file a lawsuit against pharmaceutical companies that have contributed to the growing opioid crisis.” Other local and national unions may join a class action suit, the site reported.

A coalition of 41 states‘ attorneys general also served five major opioid manufacturers with subpoenas “seeking information about how these companies marketed and sold prescription opioids,” according to the update. “The coalition is also demanding documents and information related to distribution practices from three drug distributors.”

Many point to the tobacco industry as precedent for these lawsuits, when, in 1998, tobacco manufacturers, 46 states and six other jurisdictions entered into the largest civil-litigation settlement agreement in U.S. history.

“Some attorneys general and advocates are now asking in court whether the pharmaceutical companies who marketed the drugs and downplayed their addictive nature can be held legally responsible for—and made to pay for the consequences of—the crisis,” reports the Atlantic.

However, some legal experts say that the courts may not see it that way. According to that report, “With the tobacco-industry lawsuits, customers were using the product as instructed and got sick. With opioids it’s a different story: Customers are not using the pills as directed, and so it is harder to blame the pharmaceutical companies for the effects of that misuse, according to Lars Noah, a professor of law at the University of Florida. In addition, doctors, not consumers, were the ones targeted by the aggressive marketing campaigns undertaken by pharmaceutical companies, so it can be difficult to link consumer deaths with aggressive marketing.”