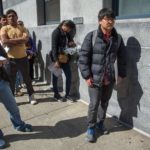 Photo: Santiago Mejia, The Chronicle Second from right: Mike Lee, from South Korea, and others wait in line to go inside the U.S. Citizenship & Immigration Service building located at 630 Sansome Street on Thursday, Feb. 23, 2017, in San Francisco, Calif. Lee, a molecular biology student at UC Berkeley, said he was going in for a naturalization interview.

It may be a “sanctuary city,” but the federal immigration courts in San Francisco are not immune from the backlog and lack of legal representation found in the rest of the country. The San Francisco Chronicle has a profile of the situation online, noting that “… since [President] Trump took office Jan. 20… U.S. Immigration and Customs Enforcement, which runs the detention facilities, has increasingly refused to release immigrants on bond after their arrest. Nieblas, the former lawyers’ association president, said the same agency is also refusing to settle once-routine cases and forcing immigrants to litigate them in court.”

The report notes that “… in most court cases, they’re on their own. Unlike criminal defendants, immigrants have no constitutional right to legal representation, and a recent study found that 37 percent were represented by lawyers, mostly from nonprofit organizations charging no fees. For immigrants in detention, only 14 percent had lawyers.

Some studies indicate that people are five times more likely to win the right to say in the U.S. if they have a lawyer. Unlike criminal defendants, who are legally entitled to representation, immigration cases are considered “civil” and no such right exists.

The Chron notes that the legal-representation issue “… is percolating in San Francisco, where Mayor Ed Lee has approved $1.5 million in city funding for immigration lawyers at nonprofit agencies but opposes Public Defender Jeff Adachi’s request for $7 million to hire 10 staff attorneys to represent detained migrants.”