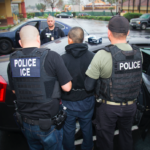 BuzzFeed is deep-diving into the problems of a backlogged immigration courts system as President Trump gears up his enforcement and deportation plans. The report notes that “… judges and lawyers interviewed by BuzzFeed News described hearings scheduled four, five, or even six years out. Already facing a crushing caseload, immigration judges are bracing for more strain as the Trump administration pushes ahead with an aggressive ramp-up of immigration enforcement with no public commitment so far to aid backlogged courts.”

And as background the websites notes that “… immigration courts, despite their name, are actually an arm of the US Department of Justice… [the][ lawyers from the US Department of Homeland Security prosecute cases. Rulings can be appealed to the Board of Immigration Appeals, which is also part of the Justice Department, and then to a federal appeals court.”

The report also notes that more than a half-million cases are pending immigration court attention.